There had been a settlement here in the Bronze Age, and the Romans built various forts in the area. One was used by them to cross the River Tees at this site which is thought that this placed Barnard Castle on the route between Bowes and Binchester. 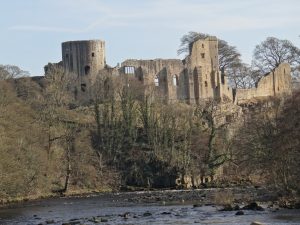 It was during the Norman Conquest that the story of Barnard Castle really begins. A Guy de Baliol was with William the Conqueror’s army at Hastings and was rewarded with grants of lands on the site of the present town. The de Baliol family’s most famous sons, both named John, who became king of Scotland and founded Baliol College, Oxford, respectively. However, it was Guy’s son, Bernard de Baliol, who replaced the wooden fortress here with a stone construction early in the 12th century. Its early owners attracted craftsmen and others able to generate wealth by giving privileges to those who would build houses around the castle.

Barnard Castle passed from the de Baliol family to the Earls of Warwick who held it until Richard, Duke of Gloucester (the future Richard III) inherited it via his wife, Ann Neville. The castle endured two sieges in the 16th and 17th centuries; the first being Sir George Bowes of Streatlam holding out for eleven days against Mary Queen of Scots supporters during the Rising of the North and the other, during the Civil War, was of less importance as the Royalist garrison in the castle surrendered after being pounded by Parliamentary artillery. The town’s history then became more peaceful.

The remains of the castle are now a Grade I listed building, whilst the chapel in the outer ward is Grade II. Both sets of remains are now in the care of English Heritage and open to the public.

The town’s history then became more peaceful but still maintained a strong military presence. The Durham Light Infantry originated from the old Durham Militia from 1759. It was led by Henry Vane, 2nd Earl of Darlington, and had an initial strength of 369 men, with the headquarters at Barnard Castle (the Vanes lived nearby in Raby Castle). Prior to that, according to old records, there was a militia stationed at Barnard Castle from 1615. It was involved in the Napoleonic Wars 1797-1816 when it was tasked with maintaining order as well as anti-invasion duties. On the death of Henry Vane in 1792, the regiment was led by his son William Vane, 1st Duke of Cleveland.

In 1853, the Crimean War saw its revival, and since then there has been a small military presence until the army left the town about forty five years ago bringing a drastic reduction in population and jobs and changing the town’s character. Barford Camp, one of several camps around the town, is the only one that still stands to some extent. It’s now a stock car racing track which loops around the old buildings. Two others have reverted to farmland, and Deerbolt has become a purpose built Young Offenders Institution which opened in 1973. (The work was delayed for a year while the site was cleared of ammunition!).

In 1747 local man, Thomas Breaks, built the notable octagonal building to replace the old tollbooth– a covered Butter Market in the centre of the town; the lower floor area was for tradesmen’s markets with the upper floor serving as a town hall for council use. Otherwise known as the Market Cross, it now serves as a very unusual traffic roundabout.
Not far down from here, on the Bank, is Blagraves building, dating from the early 16th century, which was once the inn where Oliver Cromwell probably stayed. Some of the hotels were built in the 17th century, and the King’s Head which is the largest hotel, is where Charles Dickens resided in 1838 while researching local schools for his book Nicholas Nickleby. Dickens used to check the time by the clock in the shop of Thomas Humphreys which was across the road, and asked who had made it. He was told by Thomas that his son William had, and he thereafter referred to it as ‘Master Humphrey’s clock’. He then went on to use this as a theme for his new weekly of the same name. Throughout the years other famous visitors appeared in the town including such as William Wordsworth, Walter Scott, Daniel Defoe, Hilaire Belloc, Ralph Waldo Emerson, Bill Bryson and the artist J M W Turner.

By the 1830s, there were at least thirty public houses and inns serving locals and the growing number of travellers. There were a large number of men employed as carriers who would use the pubs and hotels as centres from which, at regular intervals, they would take goods and produce to and from local towns, many of them travelling as far afield as Brough, Newcastle, York and Leeds. 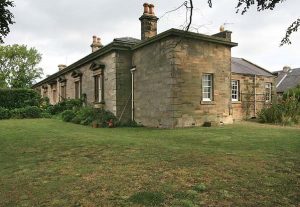 However, in 1854 a Bill was approved for a railway line to run from a junction with the S & D at Darlington to Barnard Castle and was opened in July 1856. A line running westward was opened in August 1861 from a second terminus to a junction with the Lancashire & Carlisle which helped speed up transport through the Dales. The passenger service closed in 1964 but the goods service was retained until April 1965. The large pillared portico from the station can still be seen at Saltburn by the Sea in the Valley Gardens!

Although never a big manufacturing centre, in the 18th century industry centred on hand loom wool weaving, then, during the 19th century, with the river so close at hand, the town had various mills using the water power for processing wood, corn, cloth and papermaking. During the early 1800s, these places of employment attracted families from a wide area, including Ireland, especially at a time when their own textile cottage industries collapsed. Carpet manufacture was a principal commodity with companies run by such as Richd Dodd, J Allison, Thos Crampton, Richd Dunn, Edward Raine, Messrs Whitfield, Monkhouse, Jordan, Willis and Winskill. With the influx of people, other tradesmen were attracted to the town which expanded quickly. There were tanneries, brewers, all the usual commercial shops of a thriving market town, gun makers, watchmakers, insurance companies and banks, and over ten years, fifteen day schools were run by individuals, while Mary Pearson, Elizabeth Lakeland and James Henderson offered boarding schools. The new National Free schools were run by Robert Croft and Thomas Lawson, while the girls’ section came under the control of Sarah Dobson and Jane Ollis. Despite its prosperity Barnard Castle had its workhouse which would accommodate about fifty people and was run by the Board of Guardians. Today, Glaxo laboratories provide work for many families, others are in farming, or cater for tourists. 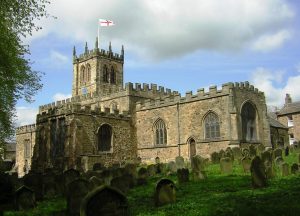 The church of St Mary which stands on the corner of Market Place and Newgate is mainly of the 13th and 14th centuries with a large Victorian tower built in 1874. It has historical connections with Richard III and the Durham Militia. It contains many interesting memorials and tombs dating from the 11th and 19th centuries as well as an unusual medieval font of black basalt. Due to interior renovation work done in 1870-71, a large number of memorials were removed and never replaced. The churchyard was closed to burials in 1860 when a Roman Catholic and a C of E cemetery were opened nearby.

The Bowes Museum is an unusual building to find on the outskirts of a town like Barnard Castle. It is a large French-style chateau, the build starting in 1869 by John Bowes (1811-85), a wealthy land owner and horse breeder, with his wife Josephine Chevallier (1825-74), in which to keep their procured treasures. He, however, lived at nearby Streatlam Castle (demolished in 1959). 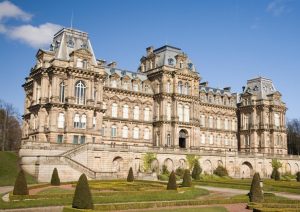 The museum, opened in 1892, has the largest collection of famous paintings outside London’s National Gallery and the most French and Spanish paintings in England. The museum’s most important patron was the Queen Mother, Elizabeth Bowes Lyon, who was a descendant of John Bowes. Of interest to local historians are the excellent archives and reading rooms with collections of local reference material. A great attraction is the 18th century silver swan automaton which periodically preens itself, looks round and appears to catch and swallow a fish! People come from all over the world to see these and the regular, important exhibitions staged there annually.

Next door is Barnard Castle School, founded by the combined efforts of Victorian visionaries who were determined to improve education. It was opened in 1886 originally as one of the North Eastern Counties Schools. These institutions were an attempt to provide education suitable for the children of the rapidly expanding middle class, mainly farmers and tradesmen. Designed as a public boarding school, it remains so to this day.
Today the Barnard Castle Meet is a big attraction with its annual carnival festival held on the 2nd Bank Holiday weekend in May. The Meet, as it is known locally, has grown from the North East Cyclists’ Meet dating back to 1885, and since the early 1900s, the town has staged three-day activities and a grand procession through the town centre. There are around twenty separate events and proceeds from collections taken go to local charities.
As the centre of Teesdale, standing on the River Tees, Barnard Castle lies in an area that is mainly farmland. The town is the hub of activity in the area, with its attractions being historical sites and buildings, outstanding natural scenery, and a pleasant rural lifestyle.