Hutton juxta Rudby, a parish town in the west division of Langbaraugh; 4 miles from Stokesley, 6 from Yarm, 11½ from Northallerton, 38 from York, registration district of Stokesley 1837-1851. Attached are the hamlets of Skutterskelfe and Sexhow, and the chapels dependent on Rudby Church included Whorlton, Seamer, Hilton, Middleton on Leven and East Rounton.
As Arthur H Brown stated sixty two years ago in his book Fair North Riding, Hutton Rudby is ‘still one of those pretty villages that is an instant delight to the eye’. The village is divided into two parts by the steep valley floor of the River Leven: the Viking settlement of Rudby on a hill to the north, and the Anglo-Saxon Hutton or ‘high town’ on the south bank ridge.
Agriculture was the mainstay of the area – by the 18th century Cleveland was becoming famous for its wheat, butter, cheese, cattle and horses. Others were employed in the trades which were essential for village life such as blacksmiths, millers, butchers, carpenters, tailors etc. Bricks were made on Campion Lane, there was a sawmill in Enterpen, and there were even miners who lived in the village and walked to work in nearby Swainby over the fields. However, at the beginning of the 19th century, alongside many other nearby villages, the weaving industry was well established here and the population had accordingly increased (1822 – 76: 1861 – 769). Some flax was grown locally, but most came from the Baltic into the nearby ports of Yarm and Stockton. 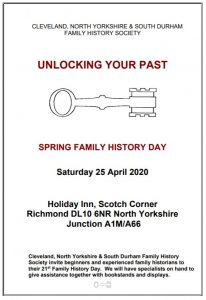